Approaching The 4th of July ::

So I thought I would do flag photographs for the next few days: 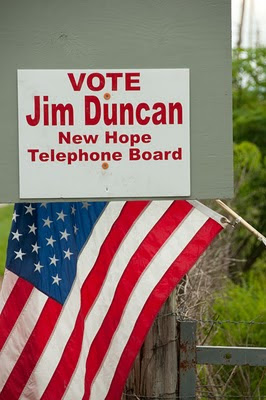 By Jack London from the December 1905 issue of Harper's Magazine:

"Sitka Charley smoked his pipe and gazed thoughtfully at the newspaper illustration on the wall. For half an hour he had been steadily regarding it, and for half an hour I had been slyly watching him. Something was going on in that mind of his, and, whatever it was, I knew it was well worth knowing. He had lived life and seen seen things, and performed that prodigy of prodigies, namely, the turning of his back upon his own people, and, in so far as it was possible for an Indian, becoming a white man even in his mental processes. As he phrased it himself, he had come into the warm, sat among us, by our own fires, and become one of us.

We had struck this deserted cabin after a hard day on the trail. The dogs had been fed, the supper dishes washed, the bed made, and we were now enjoying that most delicious hour that comes each day, on the Alaskan trail, when nothing intervenes between the tired body and bed save the smoking of the evening pipe.

'well?' I finally broke the silence.

He took the pipe from his mouth and said, simply, 'I do not understand.'

He smoked on again and again removed the pipe, using it to the point at the illustration.

'That picture--what does it mean? I do not understand.'"
Posted by Fred at 8:03 PM No comments:

Discarded Chair By The Side Of The Road ::

Found on a short back street in thriving Owen Crossroads, Alabama: 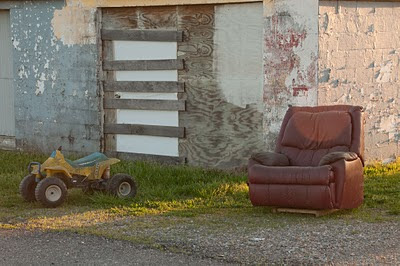 Waiting For A New Church Building ::

This sign has been up for at least the past couple of years, but the tent is only erected once or twice a year for special services out in the field. I guess they're having trouble raising the money for the new construction! 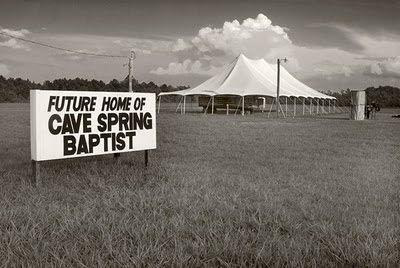 The church group will occasionally use the field for a yard sale in order to raise money, but I haven't even seen that this year. I generally try to take a photograph when the tent is up and I was experimenting here with a couple of Photoshop actions for opening the shadows, but I really liked the cloud formation.
Posted by Fred at 8:47 PM No comments:

A Holga Photograph In An Odd Cemetery ::

I've only recently begun taking some photographs in this really odd cemetery which I have often passed for the past 15 or so years. The cemetery has different sections for specific groups. There is one section just for babies and there is another section for practitioners of the Islamic religion. I'll be posting some more photographs later of the different sections, but this one is the area set aside for veterans. 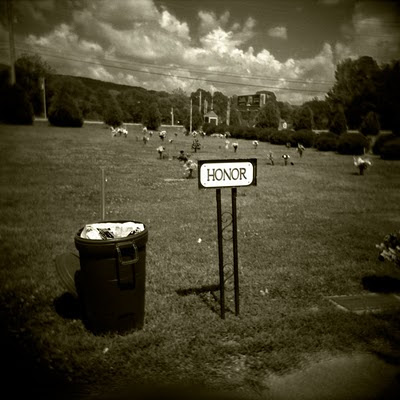 Heading Toward The 4th Of July ::

All of the fireworks stand owners are gearing up for the upcoming holiday. I've always wondered just how much money they really make during these holidays that seem to impel people to buy miniature explosive devices! 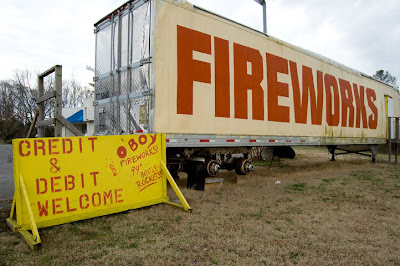 I went out pretty early in the morning on Memorial Day this past Monday and captured several images which I like. Here is one, but I did a couple of panoramas in Maple Hill Cemetery here in Huntsville, Al. that I will post later. 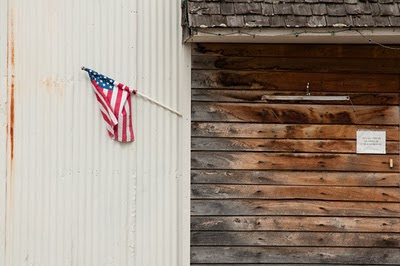 There is a little town just south of Gadsden, Al. that puts up large flags in the highway median along with the names of military personnel from that county who have died in service. I've driven through there several times over the years without taking a photograph. I'm going to try to remember to head down that way next year and spend some time taking some photographs!
Posted by Fred at 8:29 PM No comments: