A Photograph From Film ::

I still shoot some film, generally Ilford HP5, in either a Mamiya RB67 or an old Pentax  Spotmatic. This photograph is taken in a relatively small farming community just a few miles from my home in rural Alabama which runs alongside the Tennessee River. 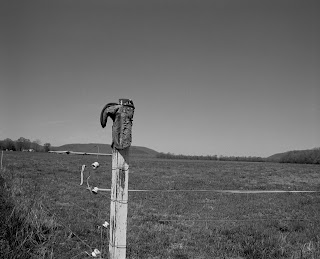 One legend I've read is that a boot on a fence post memorializes the death of a cowboy's favorite horse. I don't know if that is true or not, but this explanation satisfies me.

Nice photo! To me it looks like a lost boot that someone "posted" in case the owner came looking. The way people used to lean lost hubcaps against a tree beside the road. And I love the inclusion of the long flat Alabama mountains.