The Great Search For Scenes To Photograph ::

I live in a rural community which entails something like a 10 mile trip, at a minimum, to do most of my shopping. I generally drive several miles out of the way in order to search for a scene which I think would be worthy of a photograph. I drive these areas often because I found long ago that no matter often I drive an area I almost always find something new.

Yesterday I found this old chimney out in the middle of a field. I had driven by it dozens of times without seeing it 'til this particular morning. 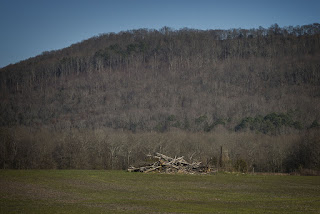 I seem to have developed an affinity lately for photographing the chimneys that are left after a house burns. 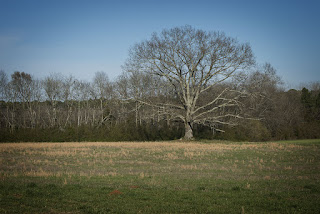 Here's a tree that I drive by most days, but I had never had the opportunity to photograph it 'til yesterday. I was looking for an afternoon shot with the warm sunlight that comes around 5:00 pm, but either the light was not right or I didn't have a camera with me. I finally took the photograph yesterday afternoon a little earlier than I wanted and not with the camera I had planned to use. I took the photograph with my Nikon D800, but I had originally wanted to shoot it from a greater height with my DJI Phantom drone. I still plan on shooting it that way.
Posted by Fred at 6:45 AM

Your Great Search yields excellent results - very nice photos. I look forward to seeing the big tree in other lights. I really enjoy seeing these mountains from another angle (I do all my shopping in Hampton Cove, driving from Gurley along Little Cove Rd.)